Specialty coffee has been a prominent industry for around 15 years now, and a lot has happened in those years. There have been boundless technological advancements, and plenty of progress at both farm and consumer level.

Buzz has been steadily building around a new-ish concept called frozen coffee, which involves vacuum-sealing and freezing coffee in order to preserve its current qualities and flavour. Coffee can be kept frozen for many years without being ruined. The concept has been adopted in various settings around the world with several cafes now offering a ‘frozen’ coffee menu.

One Melbournian in particular, Kirk Pearson has taken this idea to new heights, in what he has dubbed – Subzero Coffee. Founder of Brew Methods Julijan Markovic, spoke with Kirk earlier this month to learn a little more.

Hey Kirk, before we get into talking about Subzero, tell us a little about how you got into coffee.

While studying journalism at university, I was working as a kitchen hand in an Eastern Melbourne cafe called Miss Frank. My boss at the time offered to teach me how to make coffee, I thought it would be great to learn a new skill so I could support myself during my studies. Having received some not-so-good feedback on my coffee making skills, I very quickly became obsessed and was desperate to learn more.

I started doing some research and realised there’s a whole other world to coffee. Little did I know that it would kick off a zestful passion. I left Miss Frank a short time later and spent the next few months working in some more specialty coffee focused cafes, before finally landing a job in one of Melbourne’s most renowned cafes and roasteries –  ST ALi.

This gave me the opportunity to accelerate my growth, and learn from some of the best in the industry. There I met Todd Souter (my best friend) and a bunch of other legends. I spent the next few years there working as a barista, improving myself and eventually began competing in barista competitions – all while juggling my university studies.

After finishing my journalism degree, I decided that coffee was the career I wanted to pursue.

So tell us, what is Subzero Coffee?

Well, Subzero has gone through a bit of a transition lately – originally we started as a pop-up. But in essence, Subzero is a cafe, with a slightly different focus. Our goal is to showcase high quality, rare, and exceptional coffees and make them bountiful in selection by vacuum sealing and freezing them. This dramatically prolongs their shelf life and enables us to have a much larger coffee menu, like something you would expect at a restaurant or winery.

As I mentioned, in the beginning we just did pop-ups. Every few weeks, we would set up in a different location, and trade over the weekend. We generally collaborated with other roasters. It was great, it was a two-way street. The roaster would benefit from the exposure and the partnership, and we would benefit from having a space and equipment to work on.

We had a lot of pop-ups planned over the course of the year, even in other countries like Singapore, and then Covid-19 hit us. This meant we had to put everything on hold. During the down-time, my friend Ross Quail informed me of a small cafe opportunity at the bottom of a building in which he worked – the CoWorkMe building in St. Kilda.

I consulted with my now business partner Todd, and we decided to take on the opportunity. Within a couple of months we had set up and started trading. Our first day of trade was on 11th of July, and it’s been absolutely epic considering Melbourne is actually still in lockdown. Having our own actual site had always been the dream, but we never expected it to come so soon. 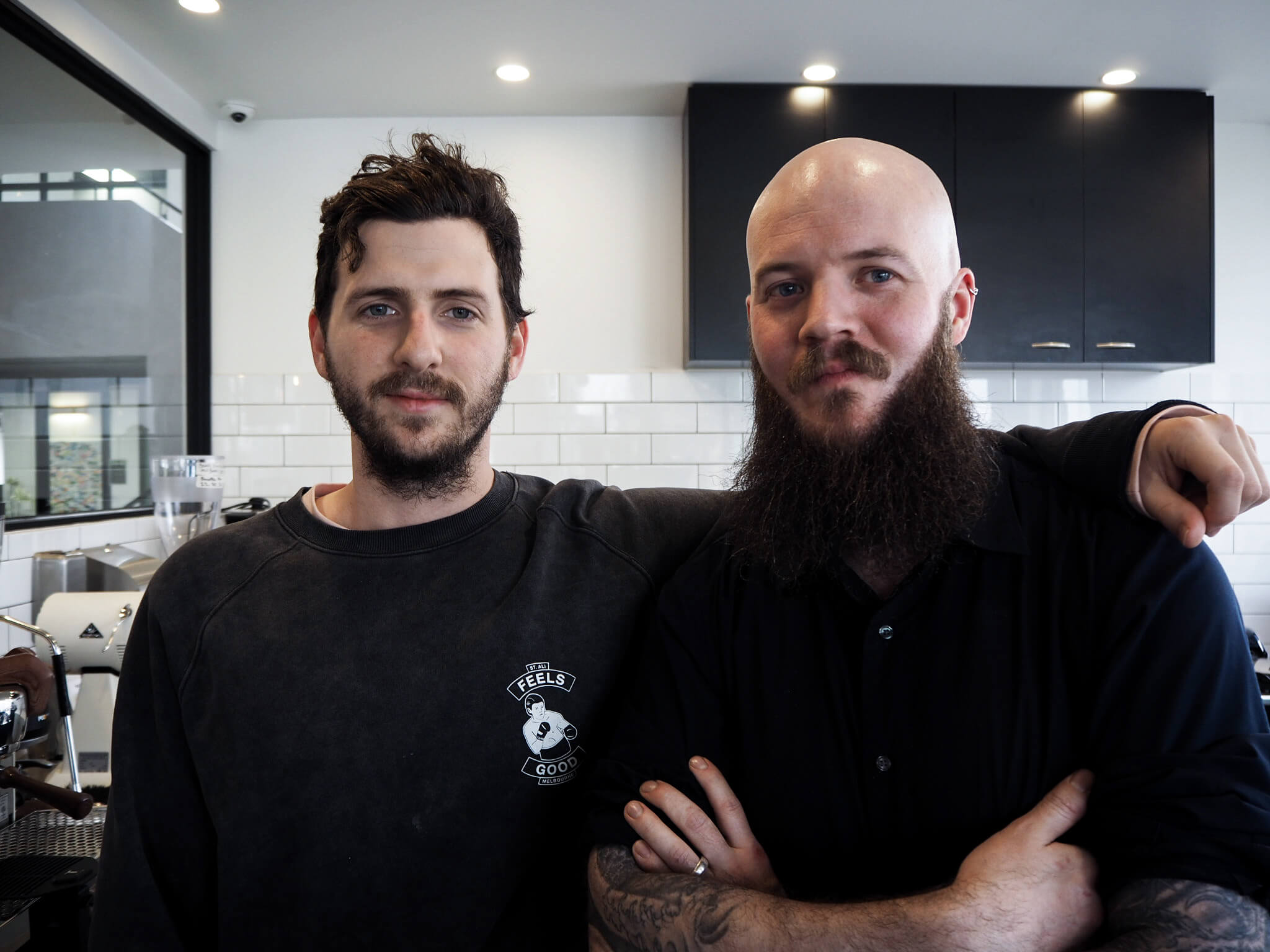 What was the motivation behind Subzero?

Personally, I’m happy to spend a bit extra on an amazing coffee experience. I enjoy it, and I know that there are others like me – but in Melbourne, nobody really offered such an experience. So I thought – ‘Why can’t I create this for people?’. So I started buying rarer, highly sought after coffees back in October last year, I would look at what other roasters around the world had in their portfolio, and began building my inventory. That was the beginning of Subzero. It makes me incredibly happy being able to share these amazing coffees now with the people of Melbourne.

How has the public received it?

We’ve been blown away by the reception. When you see the smile on someone’s face as they are drinking these coffees, you can’t help but smile yourself. Watching people look at our coffee menu of over 50 coffee offerings has also been interesting. It allows the consumer to really immerse themselves and find a coffee that they really want to drink. It’s honestly incredible! 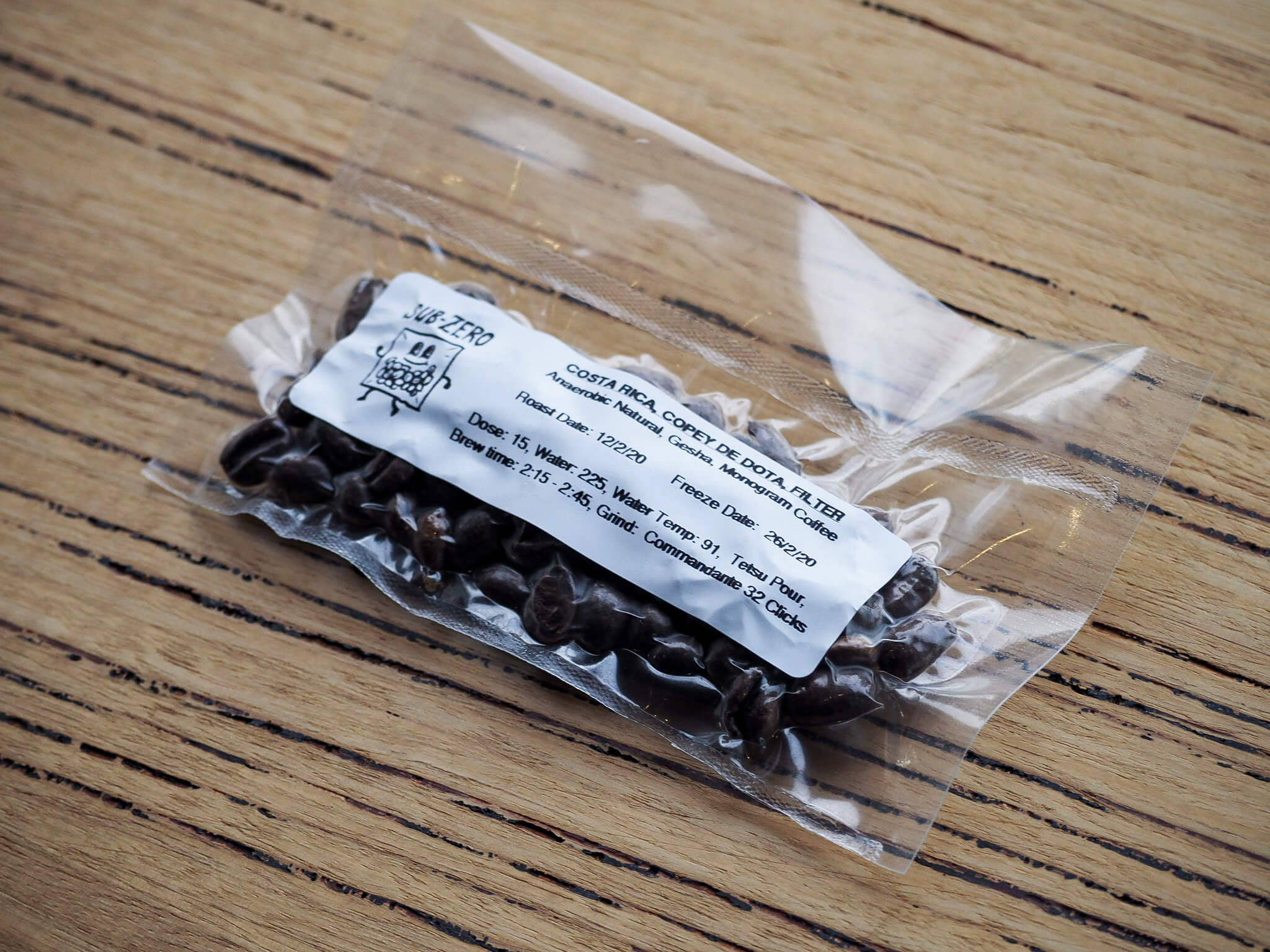 How has the industry received it?

On the whole it’s been overwhelmingly positive. I think this is a business model in which a lot of baristas would like to work in, and they are the ones who have been supporting us. Dialing in 50 coffees that score 90 points (Cupping score) and above – what barista doesn’t want to be a part of that? Or at the very least, drink some of that?

What are the main positives that you take away from Subzero?

I know this sounds cliche, but I think highlighting the work of producers. All of our coffees are traceable, and we’re completely transparent about where they come from, farming practices and how much we pay. I feel this is a very tangible way of making producers the champions of the industry. They work incredibly hard – we just brew the coffee.

Inspiring others to freeze their own coffee has also been incredibly rewarding. It’s great to see more and more people doing it themselves. We’re very open about our process and encourage people to ask questions. We’re always happy to help any way we can.

And of course, sharing these experiences and flavour with people. It’s just amazing. 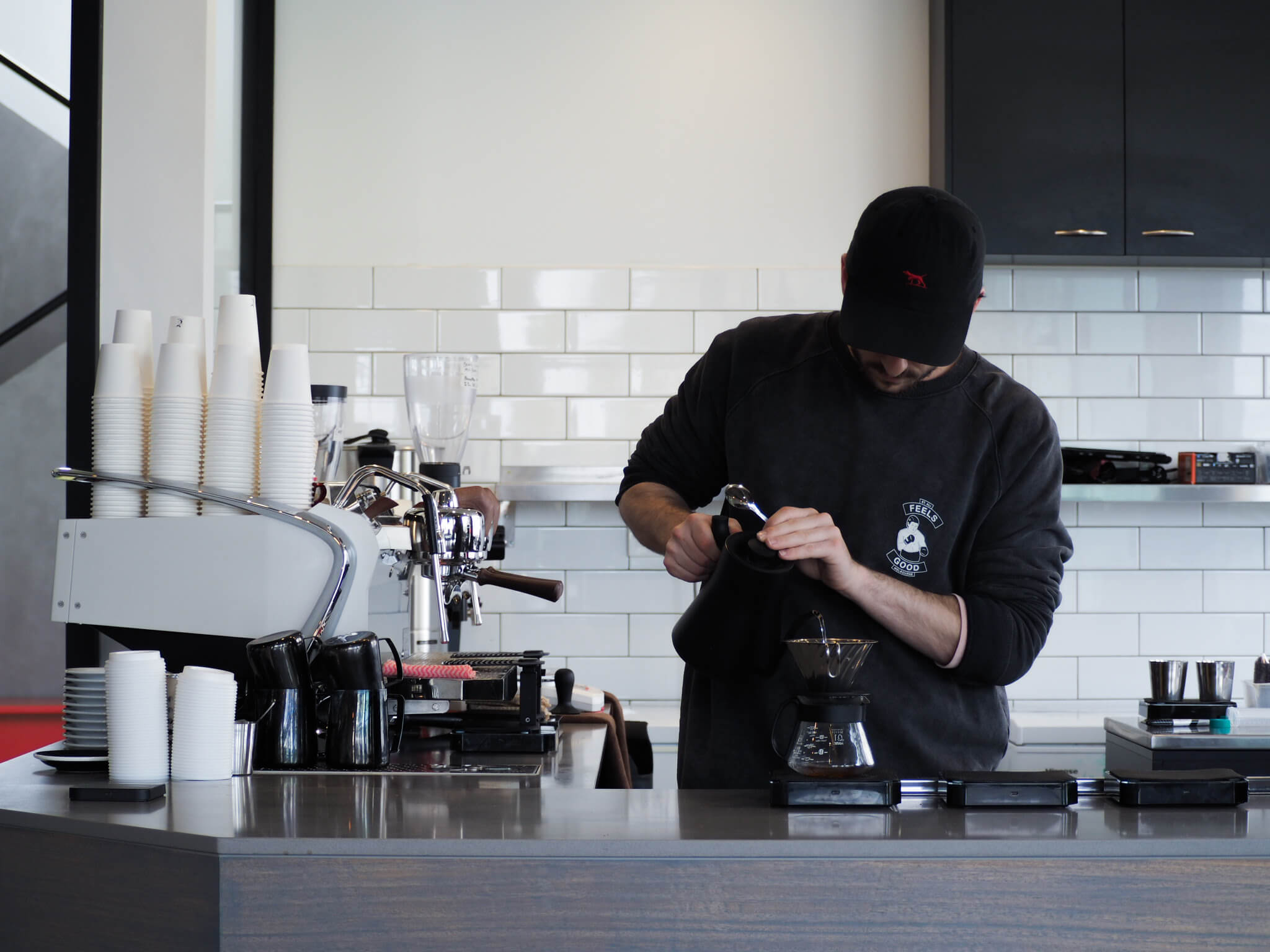 Challenges along the way?

Getting people to take us seriously. I think people thought that our idea wasn’t realistic. There was no shortage of people telling us it wouldn’t work, or that our target market was too small. Most roasters just didn’t bother writing back when we asked to use their coffee, which at the time was tough.

Finances are also a hurdle – obviously running a business is expensive and we didn’t have much to begin with. I’m very grateful we were able to collaborate with roasters and baristas. There wasn’t much in it for us, we were sort of just doing what we loved, and slowly building up the brand.

It  might also surprise people, we actually don’t own a vacuum sealer. My friend has a restaurant and I vacuum seal all of the coffee there. Most of the hard work is done, but before our first pop up – I would go to his restaurant several times a week, and seal, seal, seal, until we had something to sell to our customers. It’s a tedious process, we vacuum seal per dose – sometimes as little as 14 gram quantities. 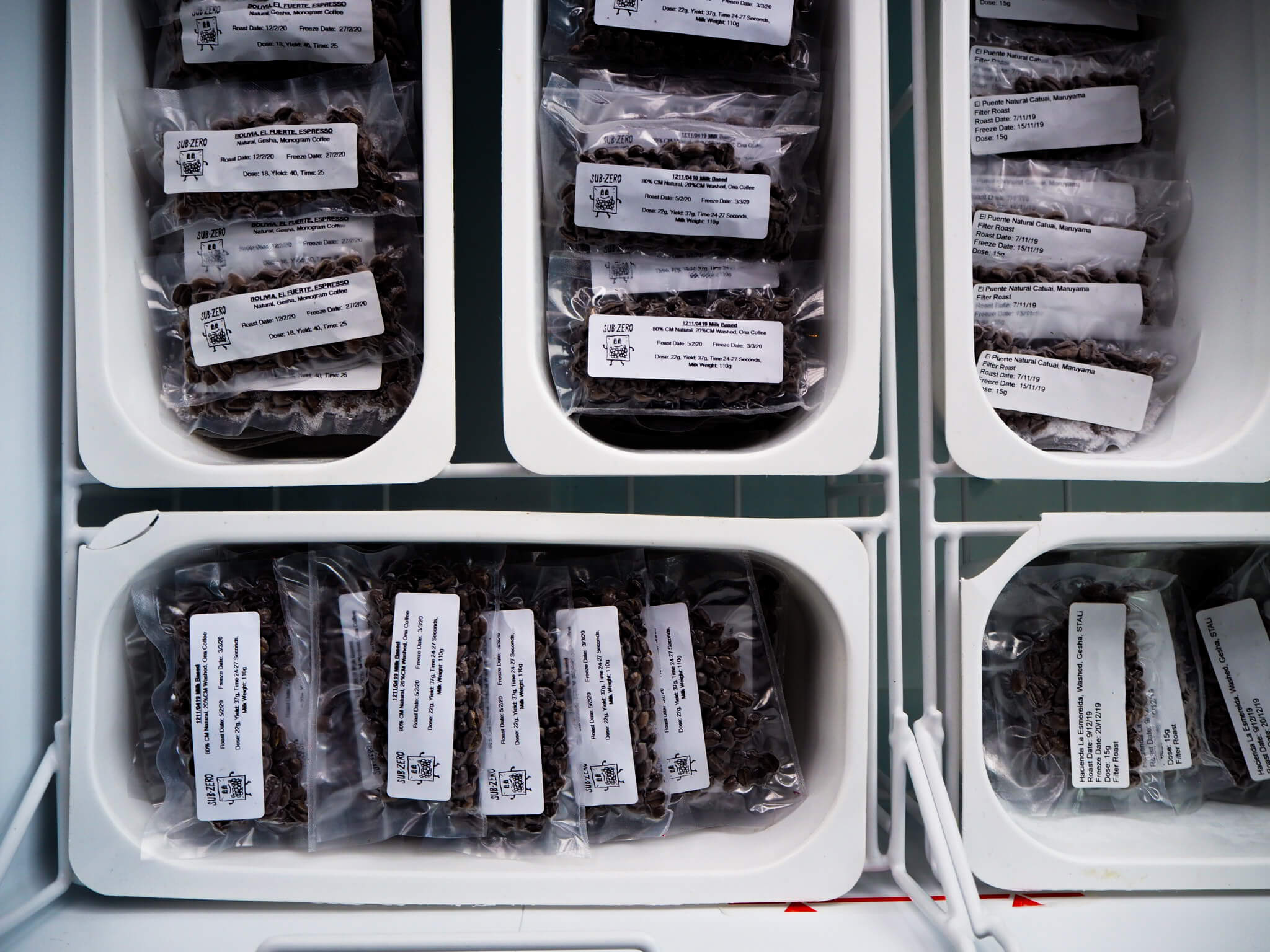 What does the future hold for Subzero?

We have evolved our concept to suit the times. We can’t reliably source roasted coffee from overseas at the moment because of shipping delays, so we started our own roasting label. We partnered with 2018 Australian Roasting Champion, Ben Toovey from Genovese coffee. We’ve had great success with it so far. We don’t really intend on ever being a wholesale roaster, we just want to be able to guarantee our own supply of coffee and enable people to have a Subzero experience at home.

We’d also like to use our new space to share our creativity through coffee. Todd and I have always wanted to create a cafe in our own image, and we are very grateful that we’ve been able to do that. There might also be a Subzero YouTube channel in the future!

The CoWorkMe building which we’re in is full of innovators and we love feeding ideas off each other. They’ve really embraced us being there and we learn so much just from coming to work each day.

The ultimate goal for this space is to share and relive amazing coffee experiences. Drinking exceptional coffee is a gateway to so many amazing things, we just want to share that level of excitement with everyone.

I know you recently started the Subzero Coffee Podcast, tell us more about that.

I always wanted to start a coffee podcast. Last year when I left ST ALi, I was actually quite intent on becoming a journalist. Politics was always my area of interest in that field, my love of politics and public policy is almost as strong as my love of coffee. I knew once I started Subzero, that there was a chance I was closing the door on entering that industry.

To get the best of both worlds, I started the Subzero Coffee Podcast. Now I can work in coffee which I absolutely love and fulfill part of my journalistic desires in a way. When I was working for ST ALi, we had a relationship with one of Melbourne’s biggest radio stations. There I met many talented broadcasters and journalists and even interned for a while.

I asked plenty of questions and soaked up as much as I could. They showed me what to do with a podcast and what equipment to get. A few months later when the lockdown began, I just started recording – which has led the project to where it is now.