HOME   >  News  >  Battle of the grinders: Comandante vs Kinu

Battle of the Grinders: Comandante vs Kinu 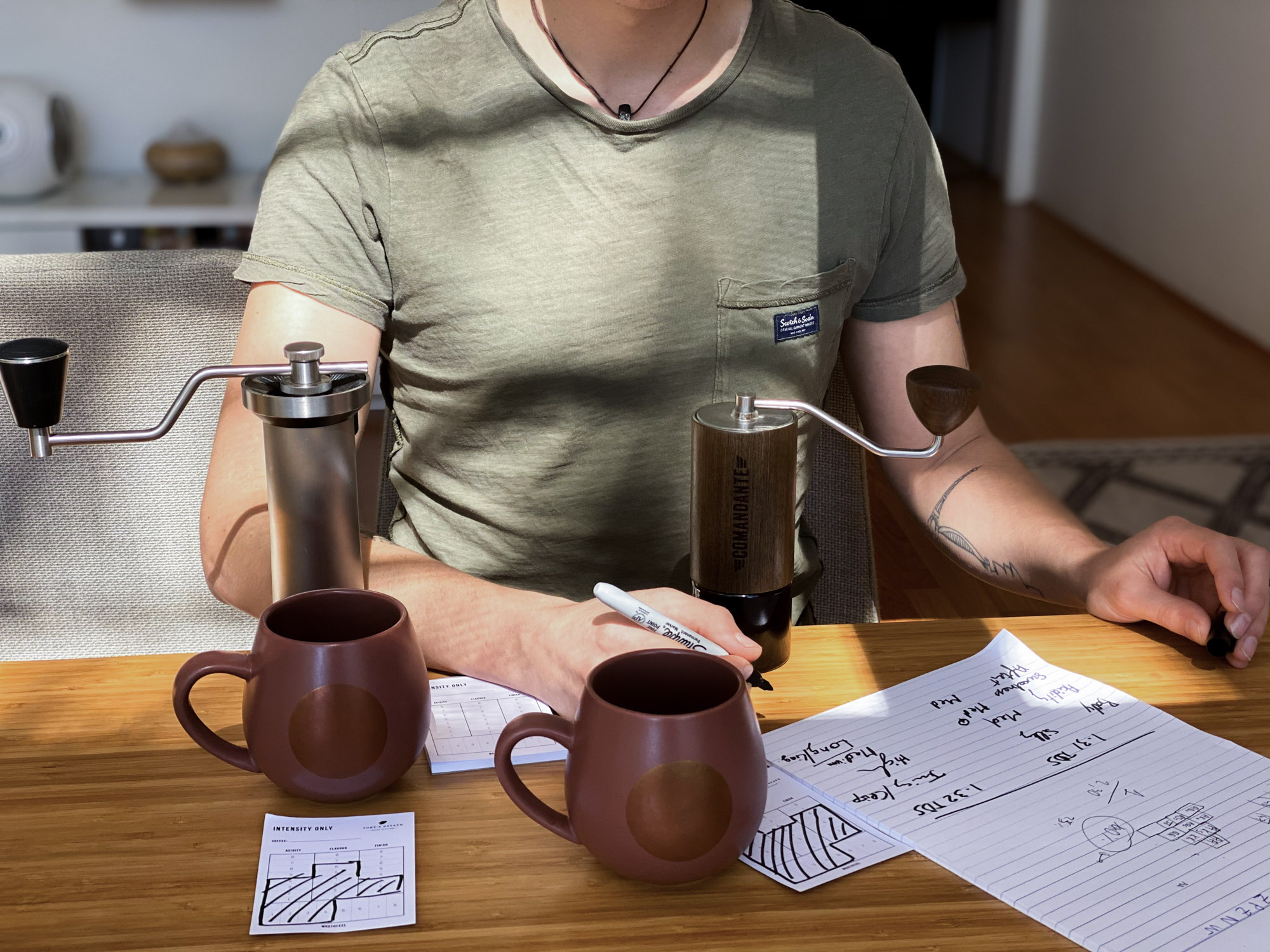 I like to approach coffee brewing in a similar way that I approach cooking. I visualise the final cup or final dish, pick the ingredients, and go through the steps of the recipe.

The great thing about cooking though, is that you can often easily fix your dish by adding acidity, salt, flavours, fat or spice under various form–but when you brew a cup of coffee, you somehow navigate in the dark until you’ve finished brewing and there is always an element of surprise as to how that coffee is going to taste.

In order to accurately predict how my coffee is going to taste, I decided to dive deep down the rabbit hole of coffee grinders and compare the impact on my final brew–with my two favourite hand grinders; the Comandante C40 and the Kinu m47 regular burrs.

Instead of seeing things in a binary way and coming to a conclusion that one is better than the other, I wanted to understand how each of them impacted the cup and what kind of footprint they would leave.

In order to do so, I spent the following six months brewing over 300 cups of coffee with both grinders and compared the cup profiles. I used a wide range of coffees from different origins, varieties, processing methods, and covered the entire roast spectrum.

To make the experiment fair, I used the same brewing parameters and recipe, and set both grinders to a setting that would result in the exact same brew strength (TDS). If my TDS between cups varied by more than 0.02%, I invalidated the experiment.

Overall, I noticed a consistent ‘grinder footprint’ for the Comandante and Kinu across various coffees and brew methods. After a while it became quite easy to distinguish which grinder was used to brew a particular coffee.

Here are my findings overall.

Always more lively and intense on the Comandante, longer lasting but sometimes sharp depending on the coffee and roast.
The Kinu seemed to round-out and soften the acidity, and delivered a more subtle and refined experience. The acidity was usually low when hot, but intensified as the coffee cooled.

Very present in both but a touch higher on the Kinu (although it might only be a perception due to the lower acidity).

No correlation found. I experienced various levels of bitterness with the two grinders. I found that the Kinu delivered slightly more floral notes which could also be perceived as slightly bitter.

The Comandante offered a crispier and juicier mouthfeel more consistently throughout the cooling period across various coffees. It also offered a slightly lighter body.

The Kinu literally turned every coffee into a round, velvety, silky experience when hot–and transitioned into a juicier, more acidic coffee when cooled. Definitely the best thing about the grinder.

Long and lingering on the Comandate. The acidity carried through from hot-to-cold, and resulted in a refreshing and bright cup.

Short to medium on the Kinu.

I never found a great difference in aroma between cups and often found them difficult to distinguish just from the smell (wet aroma). But it was the complete opposite when assessing flavour, as flavour is greatly impacted by taste, balance, and mouthfeel.

The Kinu seemed to highlight darker, deeper, and warmer notes–colours of purple, red, pink, and brown and promoted notes of berry, grapes, candy, and chocolate.

Now that we have the information, we can much more easily make a decision about the brewing. I always ask myself the following questions before brewing a cup of coffee.

This new-found knowledge of the Comandante and Kinu is therefore something that I include in my brewing strategy. If I want to make myself a bright cup of coffee with higher acidity, and yellow and orange flavours; then I would likely use the Comandate as it helps to promote that profile. However, if I wanted a coffee that exhibits redder, darker, and warmer flavours; then I would use the Kinu.

Similar to the way a professional chef cooks, knowing your equipment and how it impacts the final product is key in order to achieving your desired outcome.